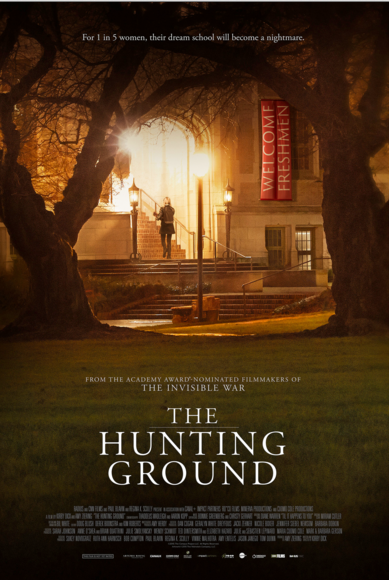 The subject matter of this post is definitely more serious than others, but confronts a pertinent topic to young women; that is why I am posting about the “The Hunting Ground,” a documentary examining university administrations’ reactions to campus sexual assault.

I first heard about the documentary from an Instagram post featuring Lauren Conrad, Hannah Skvarla (LC and Hannah are co-founders of The Little Market), Haylie Duff and Ali Fedotowsky; the ladies hosted a viewing of the film.

Last Fall I dated a guy who was pretty much obsessed with football, and I found myself often watching games with him. We spent one night watching Florida State University (FSU) face off against Notre Dame. I was familiar with FSU quarterback, Jameis Winston, for his controversial behavior (including a rape allegation). I was also aware of a Notre Dame incident, in which a sexual assault victim had committed suicide, following backlash that she received after accusing a Notre Dame football player of sexual assault.

I remember thinking about those headlines while watching the TV. I thought, “Why are millions of people cheering on an individual (Winston) who could have POSSIBLY committed a crime as heinous as rape?” FSU won and Winston was celebrated for his stellar performance.Winston won the prestigious Heisman Trophy the year prior.  Here is a timeline of the case against Winston. Anyone is innocent until proven guilty, but protocol that should have been taken in a sexual assault case was not taken into consideration with Winston.

The film depicts just how much sexual assault victims are up against in schools, particularly those with dominating Greek life and athletics. As the film states, college athletes make up only 4% of the student body, but commit 19% of sexual assaults-and many victims do not come forward.

In a tailgate sequence filmed at FSU, (female) students regaled in Winston’s accuser dropping out of school and praised him as “a great guy,” “Jameis Christ,” and coining the victim as a “liar” and “jealous.” How could an accuser possibly win when their own female peers slander their claims and they become ostracized by their entire community?

“The Hunting Ground” exposes how American universities have turned a blind eye to campus sexual assault. The film heavily focuses on two activists, who I have to say, have kinda become my heroes. Annie Clark and Andrea Pino, both UNC alums and sexual assault survivors, filed a Title IX complaint against UNC, citing that their school’s negligence in their cases conduced a hostile learning environment.

Though disturbing, I didn’t find the documentary’s material startling or shocking. Of course, I am sad for the (both male and female) victims and applaud them for coming forward with their stories. I’m hopeful that this film may actually put a stop to rape culture and I felt empowered that two young women, Clark and Pino could connect sexual assault victims through their network, End Rape on Campus, encourage others to file a Title IX complaint (here’s a guide), and bring massive awareness to this issue that has culminated in the current White House task force investigation of 109 American universities.

“The Hunting Ground” debuted on CNN November 22. Lady Gaga wrote a song for the film, “Till It Happens To You,” which can be seen above. “The Hunting Ground” was a Sundance smash and has garnered Oscar buzz. It is available for rent for only 99 cents on iTunes.

The Falmouth Road Race for the Vanessa T. Marcotte Foundation