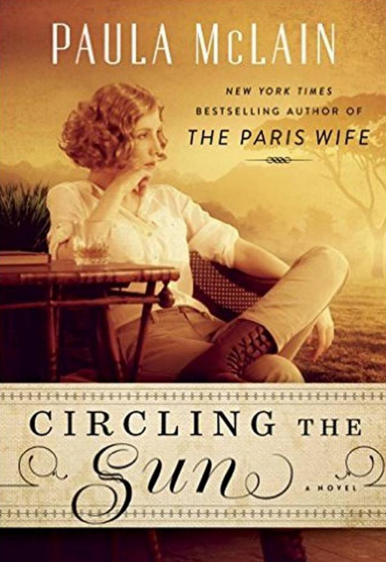 Happy First Day of Spring, everybody! Ironic that while I write this, we may be getting some snow soon!

As many of you know, I have been on crutches for close to six months. Immediately after my surgery, I stayed at my parents’ house for about six weeks. One of my friends, Gemma, was kind enough to visit me and gift me this book, Circling the Sun, by Paula McLain. If you are a history buff/and or feminist, you will appreciate this read.

Circling the Sun starts off with Markham’s childhood in British East Africa (modern day Kenya), her relationships, her career as a horse trainer, and later, her work as a pilot. She grew up on her father’s farm in Kenya, but after financial issues, was married off at a young age to Jock Purves. She later settled upon a career in horse racing, taking after her father. She was the first official racehorse trainer in Kenya. She had a second failed marriage, this time to aristocrat Mansfield Markham, which produced a child, Gervase. After that marriage, Beryl Markham embarked upon flying lessons.

Markham was definitely a rebel of her time (and would probably be considered so even today), as she rejected the notion that a woman needs to bear children and stay at home. I really admire this about her, but don’t necessarily agree with all the decisions she made throughout the novel, like abandoning her child after birth and her myriad of love affairs. A feminist hero? I would say so, but not with the straightest moral compass.

Before reading this book, I didn’t recognize the connection between Beryl Markham to Isak Dinesen/Karen Blixen’s memoir, Out of Africa, which later became a famous film of the same title, with Robert Redford and Meryl Streep. Basically, Robert Redford plays Denys Finch Hatton, one of Markham’s lovers, and characters chronicled throughout the book. Meryl Streep plays Karen Blixen (who used writing psyedumym Isak Dinesen), Hatton’s wife and friend of Markham. To read all about the love triangle, check out this Town and Country article. What a twisted web!

Overall, I really liked this book, even though it is definitely not a quick read (if that is what you are looking for). I am definitely going to make it goals of mine to read Dinesen’s Out of Africa, McLain’s first book, The Paris Wife (written through the voice of Ernest Hemingway’s first wife, Hadley Richardson) and Markham’s own memoir, West with the Night.

What are you reading right now? Any suggestions?